Another No Fly Day

I was at the field at 6:15am.  I set-up to launch WSW which would give me about 50 feet of smooth surface before getting into the weeds.  I figured that I would be ready to launch by the time I got there.  NOT...!
When I inflated the wing wanted to go more south than planned, when I got to the weeds there was a bump and I did not have enough speed to launch.  I left the ground for just a second and banged down hard.  I had shades of the big roll over and aborted.  The wing came down right on top of me and some of the lines got around the prop hub but just barely ... there was no damage.
Back at the truck I did an extensive "post flight" and discovered that the fiberglass rods had sagged and there was barely enough clearance on the right side for the wheel to clear the gas tank mount.  I probably could have tried for another launch but decided not to chance it.  The Colorado Balloon Fest is coming up and I want the machine to be in good shape.  Terry is sending me new springer rods Monday. 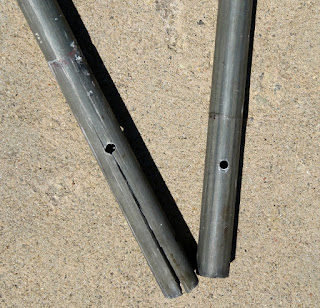 The replacements were three inches short but it should work fine.
at 6:25 PM No comments:

Good Flight.  I took my time paying attention to the little details.  The wing came up fast...I damped the surge and for the first time in awhile kept the power down and taxied a bit before committing to the launch.  I don't know where I got into the habit of hammering the throttle until I was 100 feet up ... maybe with the Thumper ... maybe from launching in short fields.  Anyway it felt much better.  I was more aware of the situation... I could feel the weight coming off the trike and I could tell when I was about to leave the ground.  Gotta remember that and keep it happening.
The weather was good ... warm enough that I didn't change after work.  Just grap the maching and go! 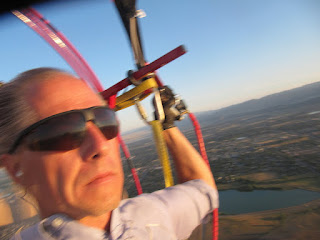 The flight was 50 minutes of boating over the field and the golf courses.  I left the trimmers in and got to know the Eden III 30m. I climbed to 4000 agl and practiced basic maneuvers.  Diving turns ... mild wingovers ... spirals.  I was surprised by the trouble I was having at getting a flat turn.  It might be that it is just a bigger wing and I wasn't patient but flat turns seemed far too slow.  The real challenge is to time the 4 stroke so that the power is there when I need it.  At one point I was diving fast and it seemed like the motor was extraordinarily slow getting up to power so I could climb out.  I'm going to have to move the pulleys down so that I can fly trimmers out and still be able to reach the toggles.
Toward the end of the flight the wing picked up and was shifting on a 120 degree arc.  Fling a straight ling my speed was vacillating between 22mph and 42mph.  I was worried that I might have to land in gusty conditions but once back over the field it was calm.  The landing was as smooth as the take off and I was surprised by the huge temperature drop at 15 feet.  All in all a good night ... I'm glad that I took 7 weeks off.  It has forced me to pay better attention and I appreciate the flights more than when I'm flying every day.
at 11:32 PM No comments:

Last full moon of the Summer.  Nice evening at Simms.  40 minutes Max Altitude 8500 feet.  Explored the area east.  The Prison sent a sheriff to ask me not to fly so close to the perimeter.  I will oblige...
Good Climb Good RPM.
Need to adjust Brake pulley placement.


This is the best Wing Suit Video I've ever seen!

Not Me!
Amazing Shot with a Go Pro 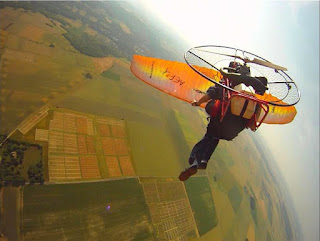 After being blown out two days in a row last week the weather finally cooperated and gave me a beautiful afternoon.  I stopped at Simms on the way to Chip's house.  The ruts from the spring are mostly gone and part of the lz has been graded.  The wind was light from the east shifting to the south.   I set up and waited for it to swing back to my bearing.  The launch was good except that the wing overshot and I had to damp the surge.   The 4 stroke runs up slow and it is difficult to modulate the speed so Next time I'm going to try fluttering the throttle and see if that helps.  It would have been nice to damp the surge and taxi a bit before hammering the take off.
The first thing I noticed was that Mike Bennett ties his brake lines 6 or 8 inches tighter than I.  I'm surprised that I did not notice this at Bubba's.  It's good that the toggles are always snug to the pulleys but I'm not sure I like the brake lines this tight.  After a couple of flights I'll decide which I prefer.  There was lots of lift and lots of sink.  At one point I was climbing at 450 ft/min and at idle I was dropping at 580 ft/min.  The air was mostly smooth except close to the hogbacks and C-470.
I stayed up for an hour and noticed that the RPS decreased 200 RPM to 3400.  I do not think it was a problem with the motor but more likely that the RPM's decrease as the motor heats up. I will re-pitch the prop anyway.
I think it was a good thing to take a break.  My numbers are going to be way down this year but I payed attention to the details and today  ...  it was  ... ALL GOOD.
at 12:43 AM No comments: